This memo explores the evolution of mortgage lending in the United States, with a particular focus on explicating the array of opaque, exotic, and increasingly complex mortgage instruments that emerged after the 1970s in tandem with the deregulation of American finance. The emergence of these mortgage types was one of many contributing factors to the housing bubble that set the stage for the 2008 financial crisis. After clarifying the most common features of subprime mortgages, the memo traces the historical evolution of American residential mortgages more generally, and exotic Adjustable Rate Mortgages in particular.

I. Timeline: Evolution of Subprime Mortgage Products and ARMs

As interest rates rose, depository institutions had to pay out more in interest to depositors, and as such required that the loans they made also adjusted as interest rates rose. In order to reduce initial monthly payments, some lenders introduced “teaser rate” features.  These ARMs differed from traditional fixed-rate mortgages or standard variable rate mortgages because they offered a short-fixed rate for the initial 2 to 5 years (sometimes labeled a “teaser” rate), thereafter resetting to a higher variable rate.

In his oral history interview for the American Predatory Lending project, Philip Lehman describes the emergence of ARMs during his time working as an Assistant Attorney General for North Carolina. Lehman noticed two major changes starting around the late 1980s: first, mortgage brokers began to play a larger role in the marketplace; and (2) second, “plain vanilla loans” gave way to more exotic mortgage loans featuring adjustable rates. Exhibit A13 is an advertisement in Barron’s National Business and Financial Weekly from 1981, which shows how financial institutions advertised ARMs as a way to help more borrowers obtain a mortgage loan.

A wide variety of ARM structures emerged during the 1990s and especially the 2000s, ranging from interest-only ARMs, option ARMs, hybrid ARMs, and more, all of which allowed households with higher credit risk to more readily access capital, though also heightened risks to those borrowers and the overall financial system. As one example of this, in his oral history interview for the American Predatory Lending project, Assistant Attorney General for Ohio Jeffrey Loeser notes the impact Pay-Option ARMs had in subprime defaults. With these Pay-Option adjustable rate mortgages, borrowers initially pay a tiny interest rate that later resets. Loeser explains that these were harmful as “there was a lot of predatory lending door-to-door [selling] even to consumers [who didn’t understand] what they were doing.” Throughout the 1990s to 2000s, Loeser describes how these types of practices became more commonplace.

Through the early 2000s, subprime lending via exotic ARMs (ARMs with features such as a low two year teaser rate followed by a payment reset) expanded significantly.14 Subprime mortgage originations increased from $65 billion in 1995 to $173 billion in 2001.15 From 2001 to 2004, rapid growth in subprime loan origination continued, supplemented by an increase in reliance on in exotic loans.16 Most notably, from 2004 to 2006, three types of exotic loans – interest-only, option-adjustable-rate-loans (“option ARMs”), and 40-year balloons – increased from 7 percent to 29 percent of the mortgage market according to data from Inside Mortgage Finance.17  Low interest rates in the early 2000s, a strong economy, and expectations of ever rising house prices,  allowed more borrowers with otherwise subpar credit to qualify for these subprime mortgage loans.18 During the 1980s and 1990s, subprime loans used by borrowers were almost exclusively  to refinance existing mortgages, but the portion of subprime mortgage originations taken out as original mortgages increased some over time. For example, by 2006, subprime refinance loans accounted for just over 50 percent of all subprime loans.19 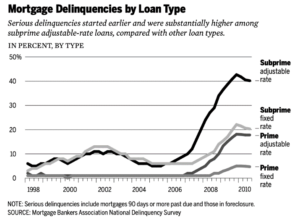 During the run-up to 2008, the prevalence of ARMs in the prime origination market diverged significantly from the prevalence in the subprime market. From 2003 to 2005, ARM mortgages accounted for a modest 10 to 30% of the prime market.20 However, in the subprime market, ARM loans took a higher share, increasing from a 30% share of subprime mortgages in 1999 – matching the later-observed peak share in the prime market – to approximately 50 percent of the subprime market between 2003 and 2006. It was presupposed that borrowers would refinance these mortgages at the time of rate resets, which was possible to do up through approximately 2004 as house prices increased and interest rates remained low. But as housing prices began to decline thereafter and interest rates on these mortgages increased, there was a wave of payment “shocks” to borrowers, who were unable to make the reset, higher payments and who found themselves unable to refinance. This drove a significant growth in delinquencies, as shown in Exhibit B.21

In an American Predatory Lending interview, Al Ripley, a Director in the North Carolina Justice Center since 2003, emphasizes how the introduction of ARMs like the 2/28 ARM and 3/27 ARM confused consumers: “They didn’t understand how the documents worked, they didn’t understand how the loans worked, and they were losing their homes because of it. And so, we started to see more and more cases of that.” Investors in the secondary and tertiary mortgage markets also received marketing that downplayed risks.  Exhibit C shows an example of an early advertisement targeted at investors that touted the supposed security of investing in adjustable-rate mortgage funds. 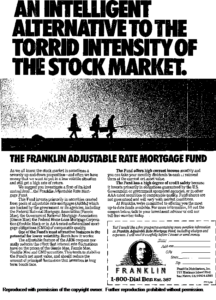 In addition to predatory advertising, subprime products sometimes encouraged predatory lending that disproportionately affected minority communities. Home ownership rates in minority groups did not rapidly pick up until the early 1990s. Legislation such as the 1968 Fair Housing Act (FHA) expanded on the Civil Rights Act of 1964 and made denials of mortgage loans or other real estate transactions based off race or ethnicity illegal.22 Although this was an influential first step towards broader home ownership by race and ethnicity, the gap between income and house prices still kept millions of families from buying homes. Lenders sought to make housing more affordable by developing subprime mortgage products. These loans often hid high costs, fees, and penalties to create an illusion of affordability. Predatory lending practices and foreclosures disproportionately impacted minority families throughout the United States. As stated in one study on the topic: “[S]ubprime loans are three times more likely in low-income neighborhoods, five times more likely in African-American neighborhoods, and two times more likely in high-income black neighborhoods than in low-income white neighborhoods.”23 Furthermore, some subprime lenders specifically targeted minority communities and pitched homeowners to refinance into more costly mortgage products as a way of draining the borrower’s home equity, leaving these borrowers worse off.

Since the 1980s, the adoption of adjustable-rate mortgages as a part of the mortgage market has quickly picked up. Exotic features of mortgages loans emerged and included teaser rates, balloon payments, and “pick-a-pay” options. In particular, minority families and individuals more likely to agree to loans with fewer credit requirements and lower down payments were disproportionately impacted by these emergent exotic ARMs. Post–financial crisis, the prevalence of exotic ARMs has fallen significantly. From its highs of a majority of new mortgage originations in the mid-1990s, the ARM share is now less than 10 percent of recent residential mortgage originations.24