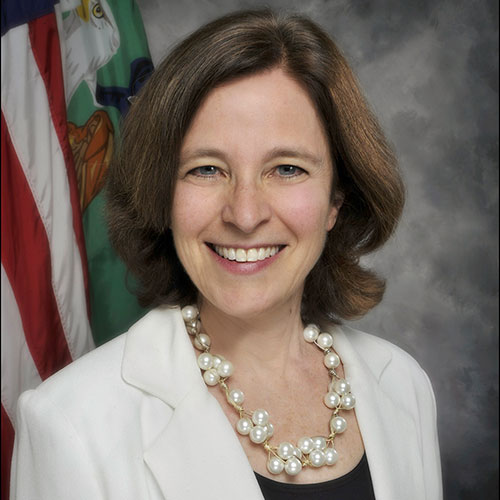 Sarah Bloom Raskin was the Commissioner of Financial Regulation for Maryland from August 2007 to October 2010. Raskin’s responsibilities included regulating Maryland’s state-chartered banks, credit unions, mortgage lenders, mortgage servicers, and trust companies. Under her leadership, Maryland’s financial regulation division played a proactive role in the state’s response to the 2008 Financial Crisis, during which none of Maryland’s 60+ financial institutions failed. During Raskin’s tenure, Maryland reformed examination, supervision, and lending process standards. In 2010, Raskin transitioned from her role as Commissioner to serve as a Governor on the Federal Reserve Board. In 2014, President Barack Obama appointed Raskin to serve as the Deputy Secretary of the United States Department of Treasury, where she was the highest-ranking woman in the history of the Treasury Department. For the 2019-2020 academic year, Raskin is a Rubenstein Fellow at Duke University, where she works closely with the Global Financial Markets Center at Duke Law School. Throughout her career, Raskin has worked across public and private sectors and has provided expert testimony on financial regulation and consumer protection matters to policymakers, organizations, and the media. Raskin holds a Juris Doctorate from Harvard Law School and a Bachelor of Arts degree from Amherst College.