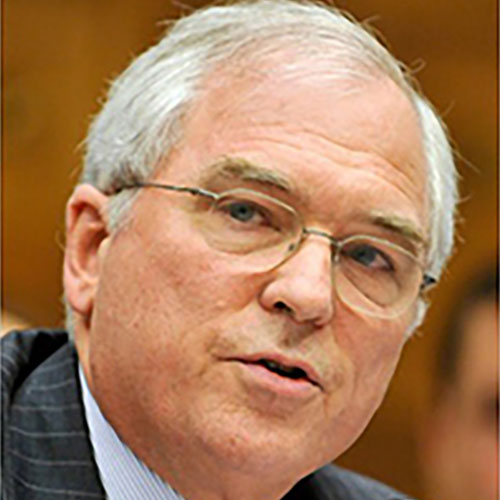 Joseph A. Smith served as the North Carolina Commissioner of Banks from 2002 to 2012. In this role, his responsibilities included supervising approximately 90 state-chartered banks and trusts, and monitoring the operations of specialty finance companies like non-bank mortgage and consumer lenders, check cashers, and money transmitters. During his tenure as Commissioner, Smith served as the Chairman of the Conference of State Bank Supervisors from 2009-2010. In this role, Smith facilitated discussions among state-level stakeholders regarding banking regulation and helped coordinate multi-state regulatory initiatives. Throughout his career, Smith has been a leader in enforcing the North Carolina Predatory Lending Law. Smith has testified before Congress prior to and during the Financial Crisis, both in his role as the North Carolina Commissioner of Banks and on behalf of the Conference of State Bank Supervisors. Smith holds a Juris Doctor from the University of Virginia and a Bachelor of Arts from Davidson College.

Remarks of Commissioner of Banks, Joseph A. Smith, Jr., before the North Carolina Banking Commission. (2003)

Smith gave these remarks after being sworn in for his first term as the North Carolina Commissioner of Banks. He outlined his policy priorities as Commissioner and identified industry and community stakeholders with which he intended to partner to achieve those goals. His priorities included the modernization of North Carolina’s banking laws and bank supervisory activities, enhanced enforcement of the North Carolina Mortgage Lending Act, encouragement of best practices in the mortgage and consumer finance industries, and the creation of banking infrastructure for underserved low-income communities.

Smith provided recommendations for addressing what he characterized as ongoing “conflict and competition” between federal, state, and local governments regarding regulation of the financial services industry. He sketched the complicated interactions between federal and state regulations and the respective regulatory agencies, from the perspective of a state regulator. Smith responded in particular to remarks made on April 16, 2003 by John D. Hawke, Jr., the Comptroller of the Currency, who leads the US Treasury Department’s Office of the Comptroller of Currency(the OCC). A federal agency that regulates nationally-chartered banks, the OCC had the power to preempt provisions of state laws from applying to national banks.Smith probed how to negotiate the disagreements between the federal government and state governments over the extent to which state predatory lending laws can apply to national banks and their mortgage subsidiaries. Smith cited the North Carolina Predatory Lending Law and the North Carolina Mortgage Lending Act as examples of successful state policy that are at risk of preemption by federal regulators.

In this testimony, Smith linked the increasing number of foreclosures in North Carolina in the early 2000s to structural changes in the mortgage industry since the 1990s. The testimony contains data and detailed analysis on the factors driving foreclosures from the vantage point of a state-level regulator. Smith identified one primary structural change. The mortgage industry evolved from local institutions that were combined mortgage originators, lenders, and servicers, into an industry of companies fulfilling these roles separately, with many of them being located out-of-state and capitalized by global financial institutions. He concludes with a list of factors that he saw as driving the increase in foreclosures, along with several policy suggestions to counteract the foreclosure trend.

Testimony of Joseph A. Smith, Jr., North Carolina Commissioner of Banks, on behalf of the Conference of State Bank Supervisors, on “Mortgage Market Turmoil: Causes and Consequences”, before the Senate Committee on Banking, Housing, and Urban Affairs, 110th Cong. (2007)

In this testimony, Smith put forward an explanation for difficulties in the subprime mortgage market and outlined responses to the situation by state banking regulators. Smith attributed those difficulties to the structural changes in the mortgage market since the 1990s as well as federal laws and agencies that conflict with or preempt state predatory lending laws, which made it harder for states to regulate against predatory mortgage lending. Smith emphasized that state and federal regulatory agencies must work together, and that state-level agencies and nonprofit organizations were best positioned to help people become homeowners. He also provided a list of policy recommendations for Congress to enact at the federal level.

Testimony of Joseph A. Smith, Jr., North Carolina Commissioner of Banks, on behalf of the Conference of State Bank Supervisors, on “Modernizing Bank Supervision and Regulation”, before the Senate Committee on Banking, Housing, and Urban Affairs, 111th Cong. (2009)

In this testimony, Smith examined the strengths and weaknesses of the US financial regulatory structure and offered several policy recommendations to Congress. He outlined a list of criteria  for evaluating reform of the financial regulatory system. In addition, he listed the National Mortgage Licensing System and the Federal S.A.F.E. Act as examples of effective national initiatives, while arguing that the financial crisis resulted from a decade of policies promoting consolidation of financial institutions, uniformity of responses to different situations across different states, preemption of state efforts and regulations by federal agencies, and a general attitude of prioritizing the business needs of global financial institutions over those of individual mortgage borrowers.

Testimony of Joseph A. Smith, Jr., North Carolina Commissioner of Banks, on behalf of the Conference of State Bank Supervisors, on “Financial Regulation and Restructuring”, before the House Financial Services Committee, 111th Cong. (2009)

In this testimony. Smith described the assessment of the Conference of State Bank Supervisors (CSBS) regarding the Obama administration’s plan for financial regulatory reform, and he outlined four main policy proposals endorsed by the CSBS, emphasizing the CSBS’s view that Congress must realign the regulatory incentives to favor consumer protection. Smith’s remarks illustrate state regulators’ sentiment regarding the upcoming regulatory reforms at the national level. Mr. Smith emphasized the need to end “too-big-to-fail” policies and instead establish a fair protocol to resolve failing bank holding companies.

Smith gave this speech in his capacity as the outgoing chairman of the Conference of State Bank Supervisors for 2009-2010. He outlined the overall situation regarding the financial crisis and sketched the current state of federal-state regulatory collaboration. While noting that economic data indicated that the worst part of the recession had receded, he argued the federal government’s policies upholding “too-big-to-fail” have negatively impacted local and state institutions, which were struggling to compete without the implicit government guarantee afforded to the large financial institutions. Smith expressed optimism about state regulators’ anticipated roles in new federal regulatory mechanisms but he also expressed concern about federal agencies’ continued preemption of state banking regulations.