This memo analyzes mortgage enforcement actions (MEAs) issued in the State of Ohio.  It is based on data derived from the records of the Ohio Department of Commerce’s (DoC) Division of Financial Institutions (DFI), the state agency responsible for mortgage regulation. Our project sought to first extract, then analyze, the text of these MEAs to better understand the evolution of Ohio’s mortgage market in the run-up to the financial crisis.

The Ohio Residential Mortgage Lending Act (RMLA) regulates mortgage lending activities in the state of Ohio.[1] Provisions within this act establish licensing requirements for mortgage lenders,[2] prohibit or require certain conduct by lenders,[3] and grant the Ohio DFI investigatory and disciplinary powers to enforce the act.[4]

In our exploratory analysis, one clear trend was an increase in enforcement in the years leading up to the 2008 financial crisis. In Figure 1, we see relatively sparse issuance of enforcement actions at the beginning of the decade, with the DoC only issuing 80 MEAs from 2000-2002 combined. This number dramatically increased beginning in 2003, and stayed consistently high, with between 500 and 1,200 enforcement actions issued annually until 2010.

The Ohio DoC issued MEAs to a variety of entity types, which consisted of both individuals and the organizations that employed them. Most recipients of mortgage enforcement actions in our time frame were individual loan originators, constituting about 82.7% of our data. The remaining 17.3% were received by various types of business organizations; Figure 2 (below) breaks down this group by organization type.

Figure 2 Breakdown of MEAs by Entity Type. Entity definitions are clarified in the Appendix

Figure 3 below shows that the composition of MEA recipients remained fairly constant from 2002 onward (there was only one MEA in 2001), with loan originators accounting for 70% to 90% of MEAs and mortgage lenders and brokers (referred to as RMs) accounting for 10% to 25%. The graph shows that from 2004 to 2006 individual loan originators received an increasing proportion of total MEAs, accounting for roughly 90% of the total in those years. This increase may have resulted from a concerted effort by the Ohio DoC to counteract the nation-high number of foreclosures in the state in 2004 (59,000).[5] We explore this possibility further below.

Figure 3 Percentage Composition of Entity Types from 2000 to 2010

The type of MEAs issued by the DoC changed over time, as shown in Figure 5. Shortly after Ohio’s mortgage licensing system was established, the most common MEA was the denial of a license (Notice of Intent to Deny constituted 76% of all MEAs in 2002). As the DoC began to clean up the mortgage market and market participants took notice of the new requirements, the proportion of license denials steadily declined.

Types of Wrongdoing in MEAs

With Natural Language Processing (NLP) and Topic Modelling, our team was able to analyze the individual texts of MEAs and categorize MEAs by topics. As shown in figure 5 below, the most common violations cited in MEAs were administrative issues such as failing to complete the required continuing education (CE) hours for licensees, and for previous criminal history issues.

Finding 1: More stringent licensing requirements for mortgage brokers and lenders, along with regulations and subsequent proactive regulations appear to have been at least somewhat effective in preventing some mortgage-related misconduct.

The introduction of education and hourly requirements for mortgage brokers resulted in 1,926 MEAs failing to meet an hour or educational requirements, which accounts for almost 28% of all the MEAs issued by Ohio DoC.

Whereas previously, applicants only needed to disclose felony convictions, the amended OMBA Section 1322.03 (A) (7) now required applicants to disclose a larger range of previous convictions.[6] In looking through all MEAs issued in Ohio from 2000-2010, we found 549 MEAs that contained the word “felony” in the text, indicating a possible previous felony conviction, which would have barred an entity from obtaining a mortgage license prior to 2002. However, with the expanded scope of regulations, we found that there were 1,903 MEAs that contained the words “criminal”, “theft”, “embezzlement”, “forgery” or “fraud” but not the word “felony”, indicating that these were individuals who would not have been barred from receiving a license prior to these amendments.

While the introduction of OMBA explains why MEAs were issued so frequently post-2001, MEAs began to consistently decrease after 2007, falling almost 50% from 2007 to 2010. In January 2007, the Ohio General Assembly passed the Homebuyers Protection Act.[7] The act tightened regulations around mortgage fraud, including forbidding mortgage lenders from making loans to people who could not reasonably afford to pay them back[8], and gave the DFI the power to conduct formal background checks into applicants. This proactive bill was in stark contrast to the prior 2001 bill, which was more reactive in nature, and which served primarily to introduce rudimentary regulation into the mortgage market. Therefore, the proactive regulation required in the 2007 law may have provided a disincentive to “shady” actors that were considering entering the mortgage market.

To investigate this further, we classified the topics we assigned to each MEA as “Administrative”, “Criminal Background” and “Criminal Conduct”. In Figure 6, we see that beginning in 2007, there was a downward trend in the number of criminal related MEAs issued, while the number of administrative MEAs stayed relatively constant. Figure 7 further strengthens this hypothesis by showing how all the different categories of MEAs with criminal wrongdoing decreased from 2007 to 2010. Hence, the downward trend can be attributed most heavily to a reduction in the number of MEAs related to criminal activity, which supports our intuition that proactive regulation was effective in decreasing the level of criminal activity in the mortgage market in Ohio.

Figure 7 The decrease in activity was common across the different categories of “Criminal Activity”.

Some of the most common criticisms levied against the introduction of licensing requirements are that they would significantly increase the regulatory burdens for overworked government bureaus or that such requirements may deter qualified applicants. Should this be the case, we would expect the number of primarily administrative MEAs to have spiked significantly after the 2007 Homebuyer’s Protection Act.[9] However, we note in Figure 8 that the number of “Administrative” MEAs remained relatively constant from 2007 to 2010 between 300 to 400, which indicates that the more stringent licensing requirements generally did not influence applicant flow. One possible explanation for this consistency is that those who would have passed the original requirements would likely still pass these more stringent requirements and those who failed to satisfy the enhanced requirements would have likely also failed to satisfy the earlier requirements.

Findings 3: Although MEAs were effective on the whole in reducing MEA infringements, there were a significant number of repeat offenders.

In processing the data, it became very apparent that the Ohio DoC took the approach of issuing an MEA for each instance of an infringement, and many infringements formed part of a series, with Division Orders and Report and Recommendations serving as the conclusion to a series of appeal hearings for Notice of Intent to Denys or similar MEAs. For instance, a single loan originator could be issued six MEAs for two offenses, with separate series of Notices of Intent to Deny, Division Orders and Report and Recommendations for each offense. To see the extent of this phenomenon, the Ohio DoC issued 6,918 MEAs to only 3,096 unique entities.

In Figure 9, we see that around 92% of entities were issued three MEAs or less, which implied that a significant portion of MEAs were generally effective in deterring further patterns of noncompliance. However, 8% of entities were issued more than three MEAs, exhibiting a pattern of repeat behavior. While many of the instances of a recipient receiving three or less MEAs could simply reflect the typical process of issuance—for example, two notices of violations followed by a final Division Order or Settlement Agreement issued after an appearance—that may not always be the case, and there were entities issued four or more MEAs.

Figure 9 Many MEAs were issued in sets, but there were some repeat offenders 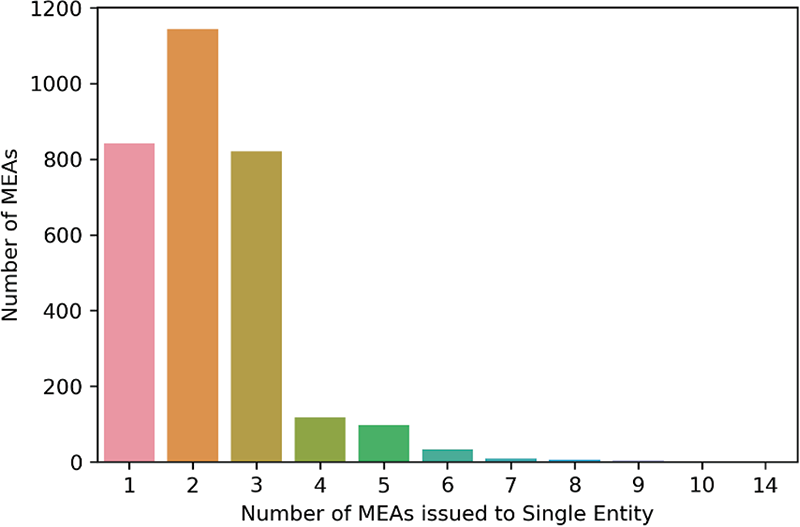 Our data only has the dates on which the MEAs were issued and not necessarily the date of the infringement. The Ohio DFI could very well have aggregated many infringements that occurred at different times and issued MEAs in batches according to internal processing procedures. Given that much of our analysis was heavily time-period based, this could mean that some of the patterns we analyzed were not due to changes in patterns of wrongdoing over time, but changes in processing patterns of the Ohio DoC.

Although the focus of our research was on state enforcement patterns before the 2008 financial crisis, the lack of data after 2010 limited our ability to confidently state that the 2007 Homebuyers Protection Act genuinely decreased the level of mortgage-related misconduct in Ohio in the long run. Additionally, because we do not have additional data regarding the resources of the Ohio DoC, we cannot be sure if the fall in MEAs was due to a fall in criminal activity, criminals becoming savvier with their reporting and handling background checks, or shifts in the DoC’s enforcement priorities. An oral history interview with a member of the DFI or additional data regarding department resources and priorities at the time could help to assess our hypothesis.

As with any machine-learning model, heavy assumptions went into the creation of the model. For instance, we assumed that similar types of MEAs would generally contain similar distributions of words. However, our prior filtering process to extract what we deemed “relevant text” from long MEAs could have been inaccurate, thereby confounding our model. Moreover, we generally assigned a single topic label to each MEA, but there were many MEAs with multiple infringements. For instance, in a single Division Order, a loan originator may be charged with false advertising, operating without a license, failing to complete educational requirements and possessing a previous criminal record. Thus, the topic relevance for some MEAs was as low as 20%, but we did not have sufficient resources to analyze trends in all possible topics present in an MEA.

Another possible limitation in the topic model is that, because we looked primarily at the text to identify patterns of wrongdoing, we were unable to distinguish between MEAs that deal with crimes committed prior to obtaining a license, and crimes committed by entities while possessing an MEA, such as operating without a license. For example, we would be unable to distinguish between a loan originator who was denied a license because of a prior conviction of fraud, and a loan originator who had committed mortgage fraud while in possession of a license. A possible way to overcome this would be to filter out different enforcement action types when examining these topics, with the enforcement action types providing additional context to distinguish between the two.

In all, the distribution of MEAs in Ohio over time, the topic models that we built from processing the texts, along with the visualizations we created, offer important indications about how policy interacted with mortgage enforcement in Ohio. In particular, while it initially seemed like Ohio’s regulations were ineffective in combating mortgage-related misconduct overall, the high numbers of MEAs were more reflective of Ohio’s previous lack of predatory lending legislation, more so than a result of the law itself. Moreover, our data supports the notion that proactive state regulation can have significant impacts, as suggested by the apparent outcomes associated with Ohio’s controversial Senate Bill 185, Homebuyer’s Protection Act.

Should this research be pursued after the conclusion of the American Predatory Lending Team, potential next steps include:

[1] RMLA was passed in 2017 to consolidate and recodify existing Ohio mortgage regulation laws. Prior to this change, these provisions were known as the Ohio Mortgage Banking Act (OMBA) and the Ohio Mortgage Lending Act (OMLA). Except where noted, however, the substantive provisions were not amended by the consolidation. https://com.ohio.gov/static/documents/fiin_HB199guidance.pdf