In the state of Massachusetts, the Division of Banks regulates all financial services and all Mortgage Enforcement Actions (MEAs) for the state of Massachusetts are publicly accessible via their website.[1] Our project sought to first extract, and then to analyze the text of these MEAs to deepen our understanding of the type of infractions in Massachusetts and how this evolved over time. In this report, we summarize the data, show our most relevant findings, and discuss the limitations of our analysis.

Prior to the financial crisis, MEAs were rarely issued in Massachusetts.  Of 323 total MEAs issued in Massachusetts from 2003 to 2010, only 65 were issued between 2003 (when MEAs became publicly available) and January 2009. However, between January 2009 and December 2010, there was a sharp surge in MEAs. This is shown by the two spikes in our dataset, one occurring in the middle of 2009 and one in the middle of 2010.

In theory, an MEA can be issued against one entity multiple times, depending on the scope or standard practices of the regulatory agency. Thus, to investigate the extent of data overlap, we looked at how many times a mortgage enforcement action was issued against an entity. We found that most entities only received a single notice from the Division of Banks. Upon closer inspection, it became clear that this is because Massachusetts tends to include all infractions and/or wrongdoings in a single document, as shown in Figure 2.

Figure 2 Number of MEAs issued to unique entities. Some entities received more than one MEA. 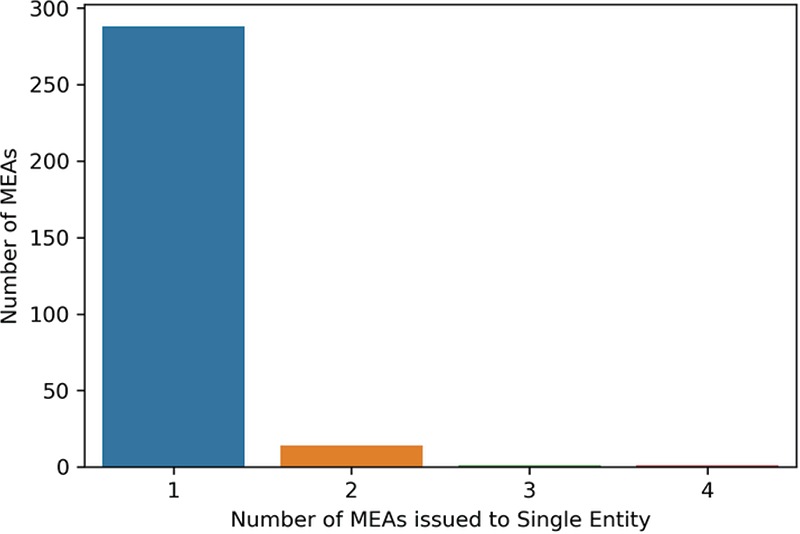 The Division of Banks supervises a wide range of entities, regulating both depository institutions like banks and credit unions as well as non-depository institutions such as mortgage lenders, mortgage brokers, debt collection agencies, student loan servicers, and more. Importantly for our purposes, Massachusetts law defines a mortgage broker as “any person who for compensation or gain, or in the expectation of compensation or gain, directly or indirectly negotiates, places, assists in placement, finds or offers to negotiate, place, assist in placement or find mortgage loans on residential property for others.”[2] In contrast, a mortgage lender is defined as “any person engaged in the business of making mortgage loans, or issuing commitments for mortgage loans.”[3]  One entity can have multiple classifications. The most common entity type is mortgage lender and mortgage broker. This combination represents around 32% of all MEA recipients. For entities only given a single classification, mortgage loan originators are most common, representing slightly over 31%. Mortgage brokers constitute approximately 20% of MEA recipients, and mortgage companies represent slightly above 11%. It should be noted that only mortgage loan originators are individuals, while all other entities are legal entities.

As Figure 6 indicates, “Temporary Cease and Desist” and “Consent Order” both appeared in each year analyzed in our data. “Temporary Cease and Desist” was the most common MEA in 2009, representing 86% of all MEAs. “Consent Order” was the most issued MEA in 2010, representing 80% of all MEAs issued by the Division of Banks. In each year prior to 2009, these two enforcement actions were always the most common MEA issued.

Finding 1: While working through the data, our team found that relative to other states we analyzed, Massachusetts issued few MEAs prior to 2009. To explain this phenomenon, we considered two opposite theories, keeping in mind that Massachusetts enacted a statute in 2004 that imposed comparatively stringent oversight of mortgage lending. Massachusetts may have had a notably weak enforcement structure and was thus less effective at regulating malpractice in the mortgage industry. Alternatively, the regulatory structure in Massachusetts may have done a comparatively good job of keeping miscreants out of the mortgage sector. Upon further inspection, we have concluded that the latter is more likely. In a paper[4] published in 2000 in the Cleveland State Law Review, Anna Ferguson observed that “Ohio has no law that effectively protects consumers from the most commonly used predatory mortgage lending practices.” We could not find significant proactive regulations in Ohio until 2007. However, as noted above, in 2004, Massachusetts passed “The Predatory Home Loan Practice Act,” which defined and prohibited common predatory lending practices such as prepayment penalties, balloon payment schedules, and interest rate spikes in the event of default. The effectiveness of proactive legislature is shown in the dominance of administrative MEAs over criminal activity-related MEAs (see Figure 7). From 2004 to 2008, most entities that received an enforcement action were operating without a license, as opposed to having been discovered to have a criminal record, thereby making them ineligible to engage in mortgage activity.

Finding 2: The exploratory data analysis makes it abundantly clear that 2009 represents a distinct period for Massachusetts. There were 121 MEAs issued that year, 84 of which were issued on June 4, 2009. According to our topic model, the overwhelming majority of these MEAs relate to “Failure to Meet Regulatory Standards,” with the final 38 representing a myriad of other topics, both past criminal activity and administrative. This is shown in Figure 8. Thus, our team decided to focus on any policy or legislative change that may have affected regulation in 2009.

Figure 8 Primary topics for Massachusetts in 2009 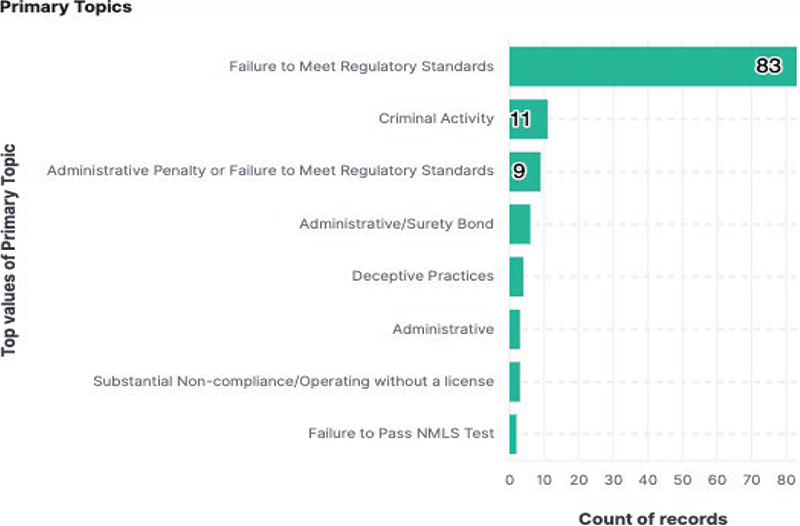 In 2009, the Massachusetts legislature enacted its state version of the federal Secure and Fair Enforcement for Mortgage Licensing Act of 2008, better known as the SAFE Act. Among many other provisions, this bill strengthened the surety bond requirement for loan originators. Of 121 MEAs issued this year, 92 of them contain the phrase “surety bond,” including 84 MEAs that were issued on June 4, 2009. It should be noted that the surety bond requirement was not mentioned in the previously referenced 2004 regulation. This shift suggests that the Massachusetts state legislature began to seriously pursue new regulations and discovered that a substantial number of lenders were operating without having sufficient resources to meet their obligations in the case of unexpected losses. The cluster of enforcement actions after the adoption of the legislation also shows that Massachusetts officials wished to establish clarity about the need to meet the new regulatory standards.

Additionally, through our exploratory data analysis, we noticed another spike in 2010. While 2009 had the largest single-day spike, 2010 was the busiest year for the Massachusetts Division of Banks, as 137 MEAs were issued, representing 42.4% of all MEAs in our data. Notably, over 95% of MEAs issued in 2010 also include the second most common topic for the enforcement action, specifically the failure to pass the Nationwide Multistate Licensing System (NMLS) test. This finding is explained by Massachusetts’s implementation of the Secure and Fair Enforcement For Mortgage Licensing Act of 2008.[5] This act adopted the new federal standards for entities aspiring to become mortgage lenders in some capacity, specifically the NMLS test. This test required a baseline knowledge of federal mortgage laws, mortgage conduct, and ethics. Due to the adoption of NMLS test in Massachusetts, certain mortgage loan originators failed to meet the federal standards necessary to obtain their license, thus resulting in the issuance of an MEA. This is shown in Figure 9. 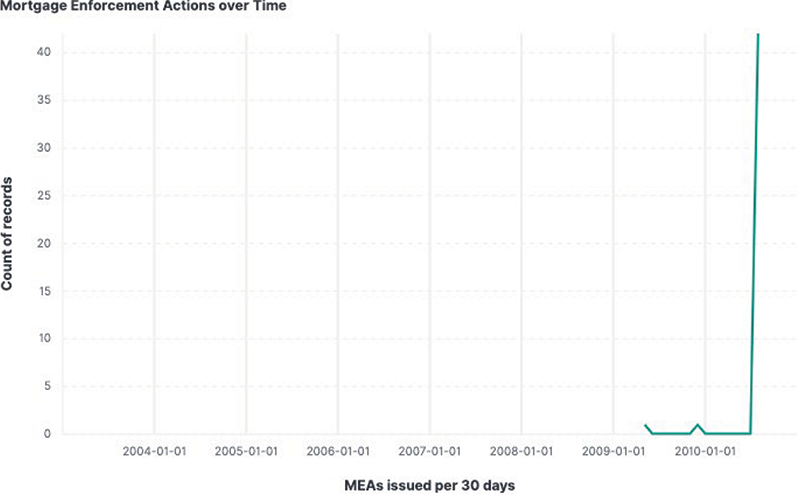 Finding 3: From 2003 to 2010, individuals (mortgage loan originators) were on the receiving end of mixed MEAs, meaning MEAs that relate to both a past criminal charges and administrative charges. However, for MEAs related only to administrative charges, only 25.2% of all MEAs were issued to individuals. For MEAs related to past criminal charges, individuals comprised only 12.8% of all MEAs. The capacity of the Division of Banks to investigate firms as well as individuals may be partly explained by its comparatively extensive resources. In 2010, the Massachusetts Division of Banks was the third highest funded department within the Massachusetts Executive Office of Housing and Economic Development.[6]

One of the biggest limitations faced is that the Massachusetts MEA data is incomplete. MEAs issued prior to 2003 are not publicly available, thus reducing the period of analysis, especially before the passage of the 2004 Act.

Furthermore, MEAs include data on the headquarters of the accused parties, but not the local authority where the infraction occurred. For example, if the wrongdoing occurred in Worcester but the company is headquartered in Boston, the enforcement action would be issued to Boston. If the location of an infraction was included in MEAs, we would be able to understand the context of the MEA to a much greater degree.

Massachusetts mortgage enforcement actions provide a wealth of data that is yet to be fully analyzed. Through our work, we have found evidence consistent with the effectiveness of Massachusetts proactive regulations, and demonstrate that Massachusetts authorities moved quickly to enforce newly enacted regulatory provisions related to mortgage lending. These findings are consistent with the conclusion that the state’s more vigorous approach to mortgage regulation moderated the worst excesses of the housing boom in the state.