In this report, we list seven key findings from our exploration of the mortgage market between 2000 and 2009 in Ohio. Although Ohio was relatively less affected by the housing bubble, our analysis points towards the existence of predatory behavior by mortgage lenders leading up to the crisis in Ohio.

Finding 1: Real home prices rose mildly in Ohio from 1991 to 2005. Home prices and the homeownership rate started to decrease in 2005.

Home prices in Ohio followed a different trajectory than other states in our sample. Figure 1 shows that prices in Ohio started to rise in 1991; in other states we sampled, prices began their ascent around 1995. Between 1991 and 2005, Ohio home prices rose by 30%, which was a far milder increase than what many other states experienced. And unlike other states, price increases in Ohio did not accelerate in the early 2000s. The precise reasons for Ohio’s tepid pre-crisis housing market are beyond the scope of our analysis, but several factors were likely at play. First, Ohio had a more robust regulatory response to abuses in the mortgage lending market compared to many other states[1]. And second, Ohio’s economy was not performing as well as many other states during this period because of the secular decline in manufacturing in the U.S.

Ohio was not immune when the housing bubble burst nationwide. Home prices bottomed out in 2012 after falling 30% from their pre-crisis high. Much like the ascent, the severity and length of the decline in home prices was less dramatic when compared to other states. 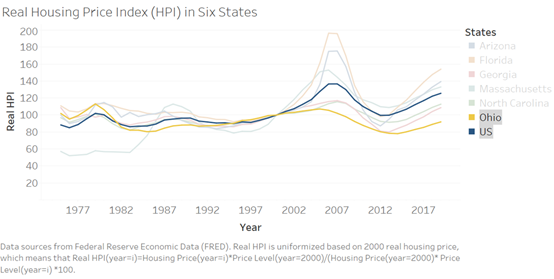 Finding 2: The ratio of refinancing loans peaked and the denial rate reached its lowest point in 2003.

The denial rate also reached its lowest point in 2003 at 17% (Figure 4) most likely due to the Federal Reserve’s interest rate increases, which made mortgages more expensive for borrowers. Ohio’s denial rate was also higher than other states in our sample, which may be reflective of tighter underwriting standards in the state or simply a dearth of qualified borrowers. The high denial rate certainly was a factor in restricting the growth in Ohio home prices pre-crisis and softening the blow once the bubble burst.

Finding 3: Investor property loans and loans issued to minorities accounted for a relatively small share of mortgage loans in Ohio.

Figure 6 shows that the percentage of investor property loans accounted for only 5% to 10% of loans in Ohio from 2000 to 2009, compared to 10%-20% in many other states. Investor property loans saw a mild increase in 2004 from 6% to 9%, most likely reflecting the euphoria and house-flipping activity that was prevalent nationwide leading up to the crisis. 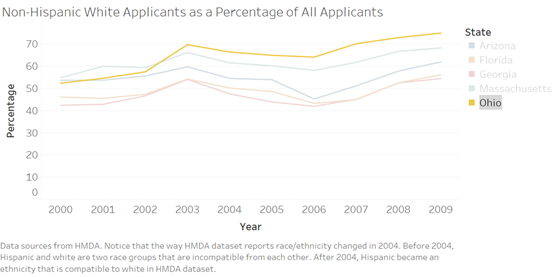 Finding 4: There is a contradiction between loan amounts and applicant income.

Similar to other states, there was a contradiction between average applicant income and loan amounts within the top 5 mortgage lenders in Ohio. These 5 lenders were determined by using the “respondent_id” numbers in the HMDA data set. After filtering the HMDA data set by state code (39 for Ohio) and for the time period (2000-2009), we sorted the data by the frequency of respondent_id. We then matched a respondent_id with a financial institution using the HMDA website.

As seen in Figures 8 and 9, there was an erratic rise in both average applicant income and loan amounts in Ohio. For example, applicant incomes spiked for both Wells Fargo (2003) and Huntington Bank (2007) as did the average loan amount. However, the dates at which both variables moved are not perfectly aligned and for the other lenders, there appears to be no relationship between the two variables. We observed similar dynamics in the other states we analyzed. 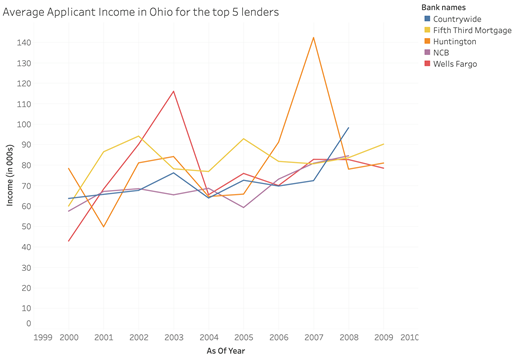 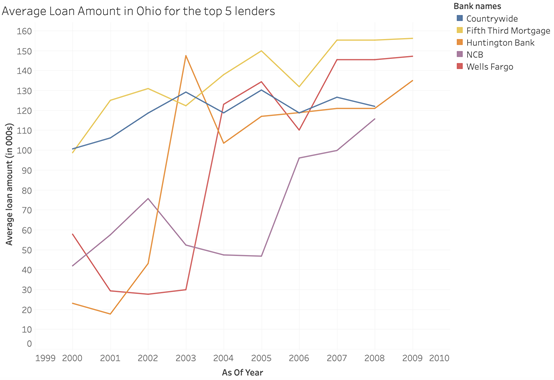 Finding 5: There was a sharp drop off in conventional loans being issued.

There was noticeable drop-off in the amount of conventional loans issued once the crisis hit in Ohio. As seen in Figure 10, at the peak of the housing bubble, 94.39% of mortgages issued in Ohio were classified as conventional, meaning they were not offered or secured by a government entity. In contrast, by 2009, conventional loans constituted just 65.6% of all loans issued in Ohio. The decline in conventional loans was filled by FHA-insured loans. The Federal Housing Administration, insures loans with the purpose of providing low-to-moderate income borrowers access to mortgage credit. These borrowers tend to have lower credit scores and difficulty in affording the standard 20% down payment for conventional loans. With unemployment spiking to 10.9% in Ohio once the bubble burst, it is no surprise that borrowers looked to the FHA for mortgage credit. 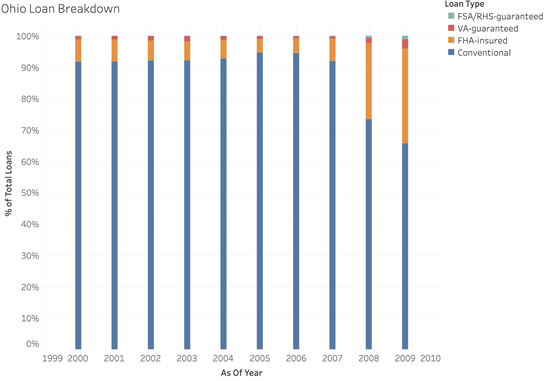