Interviewee responses to what caused the crisis

In this analysis, we apply the same analytical approach, described in our first post in this series, to the question of how interviewees explained the causes of the Global Financial Crisis. The analytical approach uses our growing database of 40+ interviews of three types of stakeholders: government policymakers, banking executives, and consumer advocates. Our approach—described more fully in our original visualization—teases out words that appeared significantly more in interviews of one set of stakeholders relative to the other two sets of stakeholders. With this visualization, we assess interviewee responses to only the following question, posed toward the end of each oral history:

Over the last decade, we have seen a number of different narratives emerge to explain the financial crisis. How do you understand what caused that crisis?1

Our analysis, based solely on responses to this question, displays those words that appeared significantly more frequently in interviews of one set of stakeholders, relative to the other two sets of stakeholders. The color scheme is the same as the original analysis: Government policymakers (blue), banking executives (red), and consumer advocates (green). 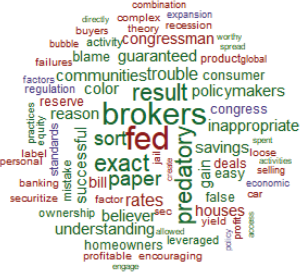 Our results suggest that these stakeholder groups understood the financial crisis very differently.

As a first step, we evaluated the interviewee responses to only the above-listed question in a word cloud without any qualification – a word cloud that reflects only a rank order of words across all interviews in our database of oral histories. This initial word cloud, shown below, displays the high prevalence of mortgage, loan, wall street, products, and to a slightly lesser extent, housing and greed as descriptors used by interviewees in response to this question. Our method allows us to tease out the variation in portrayals of what drove the origins of the crisis and it displays the distinct heterogeneity in views. This heterogeneity is in stark contrast to the most central, aggregate views that appear in interviewee responses.

In providing explanations for the financial crisis, banking executives (red) were more likely to discuss monetary policy at the Federal Reserve, resulting macroeconomic phenomena such as low interest rates, and resulting asset bubbles. One economist stressed the impact of low interest rates and a mortgage banker cited euphoria over the real estate boom.2While many interviewees from all three categories ascribed the crisis to actions by mortgage brokers and predatory lending activities, consumer advocates (green) especially featured these causes in their explanation on the origins of the financial crisis. Stella Adams, former Executive Director of the North Carolina Fair Housing Center described “a crisis of greed from Wall Street investors and from banks [as] allowing the subprime loans and lending, so they were able to get big returns because of the predatory nature of their products.” Finally, government policymakers (blue) focused more on the expansion of the home lending market and associated deterioration in lending standards. Robert Kucab, former Executive Director of the North Carolina Housing Finance Agency explained: “There was a big expansion of the mortgage origination network with the widespread use of mortgage brokers. So the availability of products was much broader, and by some organizations, some businesses that weren’t licensed and may not have had the same standards as traditional banks, and savings and loans, credit unions, and mortgage bankers.”

1 The wording of the question may vary slightly from interview to interview.